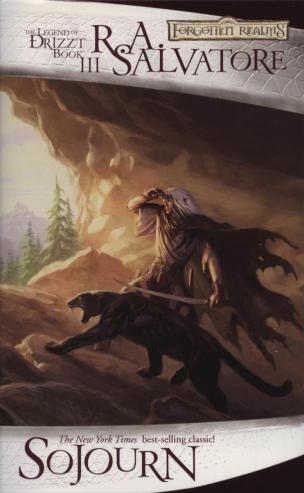 Well, I finished the third book in the Dark Elf Trilogy – Sojourn by R.A. Salvatore. And I have to say, once again, I forgot how much I enjoyed this series and it feels so good to come back to it.

However, coming back this time around has brought many new revelations. As we as readers experience life, it undoubtedly changes the way we experience novels. We learn from our interactions with people and form new ideas and beliefs. That alone should be all the reason to support rereading books. You never know what will speak to you.

Sojourn details Drizzt’s first years on the surface. He wanders around, not knowing the language or the region. Heck, he doesn’t even know about seasons and nearly freezes during his first winter. He also makes new friends and learns how to be a ranger. And by the end of the novel, he comes to a semblance of truce with Bruenor Battlehammer, who is one of the main characters and one of Drizzt’s best friend.

But at heart, this book is about acceptance, both of self and from other people, something that appeals to me greatly as I focus on similar topics within my own writing. Drizzt wants nothing more than to be accepted on the surface world and have a place to call his own, friends to call his own, and a life of meaning.

It would happen suddenly, I imagined. I would approach a gate, speak a formal greeting, then reveal myself as a dark elf… Suspicions would linger about me for many months, but in the end, principles would be seen and accepted for what they were; the character of the person would outweigh the color of his skin and the reputation of his heritage.

This is a powerful passage in the novel. It’s something that Drizzt greatly desires and something that we all want as well. At least that’s what I hope. But in the light of recent events in our country, from police brutality to violent protestors to the bigotry and racism of certain political figures, I think we could all hope for a little more compassion and understanding. There’s more to Drizzt Do’Urden than his skin tone and there’s more to the people around us as well. We just need to take a moment to put aside our prejudices and listen a little.

Coming up, I’ll start on the Icewind Dale Trilogy, the next three books in Drizzt’s journey.