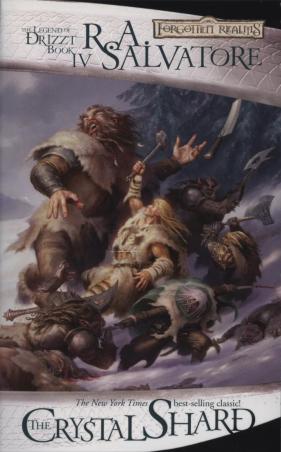 I just finished Salvatore’s The Crystal Shard. I have to be honest, and you all know I’m a

huge fan of Salvatore from my previous reviews, but this book was a little less than what I remembered. But, I understand it in some sense. Here’s why.

The Crystal Shard was Salvatore’s first published novel. And like any author will tell you, that first book is always the worst. You can only go up from there and improve your craft. So it’s understandable that this book didn’t wow me as much as the Dark Elf Trilogy (the first three chronologically but published after The Icewind Dale Trilogy). The writing was eh, okay. The action was good but it lacked that polish and flash that I’ve come to expect from Salvatore. The plot was a little basic and predictable. But the novel did have a few redeeming qualities.

We get to meet some of the greatest characters we will ever see in Salvatore’s writing. We meet Bruenor, the battle tested dwarf king. We meet Wulfgar, a barbarian who’s life is spared by Bruenor and who learns the meaning of tolerance (more on that in a moment). We meet Regis, the halfling who at times holds everyone together. And of course, there’s Drizzt and his cat, Guenhwyvar. Although, word to the wise, when writing a series make sure that gender pronouns are consistent. Guen is referred to as a he in this novel, and a she in nearly all the others.

The character development is probably one of the better aspects of the novel. We see Bruenor growing fond of Wulfgar, who he will eventually adopt as his son. We see Wulfgar growing from his barbarian prejudices and becoming a strong leader. We even see Regis learning to trust his friends to an extent. Definitely helps pull the story along.

You may think I’ve forgotten a very important character – Cattie-brie. She is the warrior woman of the group, adopted daughter of Bruenor, who plays a large role in later books. I left her to the end because I was a little disappointed in this novel. She plays almost no role in what goes on, other than to tease Wulfgar and get her hurt during the battle for Ten-Towns. I was a little disturbed by the only significant female character in the novel playing such a small role. I’m excited to watch her character develop and look forward to seeing how Salvatore brings her to life like he has his male characters.

All in all, I say a 3.75/5. I’m taking a break from Salvatore for a moment to read Miss Peregrine’s Home for Peculiar Children next. Stay tuned.

Is there a book you want to see me review? Submit a request at kristopherlcampa@gmail.com